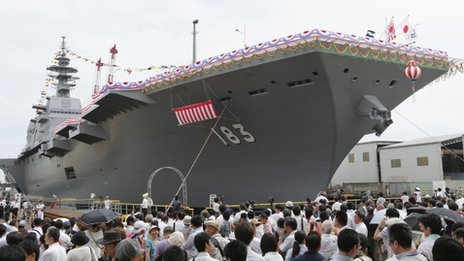 The ceremony to showcase the 248-meter-long vessel came as Shinzo Abe’s conservative government, which took office last December, considers ditching the nation’s pacifist constitution and beefing up the military.

Japan plans to use the helicopter carrier, named Izumo and expected to go into service in 2015, to defend territorial claims following maritime skirmishes with China, which has demonstrated its own military ambitions in recent years.

“We express our concern at Japan’s constant expansion of its military equipment. This trend is worthy of high vigilance by Japan’s Asian neighbors and the international community,” China’s defense ministry told AFP.

“Japan should learn from history, adhere to its policy of self-defense and abide by its promise of taking the road of peaceful development.”

The unveiling ceremony took place on the 68th anniversary of the U.S. atomic bombing of Hiroshima—a date clash which Tokyo said was coincidental.

The Japanese-built carrier can accommodate nine helicopters and is expected to play a major role in disaster and rescue missions, as well as defending sea lanes and sovereignty claims, according to the defense ministry.

Less than two weeks ago, the Chinese coast guard entered waters disputed with Japan for the first time, upping the ante in a festering row over ownership of the Senkaku islands, which Beijing also claims and calls the Diaoyus.

The rocky islands are located in rich fishing grounds in the East China Sea and are believed to harbor vast natural resources below their seabed.

The incursion came as Japan’s defense ministry recommended establishing amphibious units and acquiring surveillance drones, similar to the US Marines, to protect its claim on outlying islands.

Japan’s well-funded and well-equipped Self-Defense Forces are barred from taking aggressive action. Any move to beef up the military would require constitutional change.

The ceremony in Yokohama, attended by Deputy Prime Minister Taro Aso, was held as tens of thousands gathered for remembrance ceremonies in Hiroshima to mark the 68th anniversary of the U.S. atomic bombing of the western Japanese city.

Tokyo said the timing was coincidental and that Tuesday had been chosen because of favorable ocean tides and an auspicious date.

Last year, China commissioned its first aircraft carrier as part of a military build-up that has alarmed its own regional neighbors as Washington ramps up a focus on Asia.

The country’s first aircraft carrier, the Liaoning, went into service in September in a symbolic milestone for China’s increasingly muscular military.

However, the vessel still requires a carrier group including destroyers, frigates and submarines while fighter jets need more training to be operational, according to navy officials.